Marshalling at the Gosport Half Marathon and Runners Reviews

Firstly I want to start this post with a big thank you to my parkrun family. When I messaged you all I only expected one or two to answer but actually so many of you answered. I’m absolutely overwhelmed by you all wanting to help out. So Thank You and on with the blog post.

On Sunday I marshalled at the Gosport Half Marathon. I was stationed in Lee-on-Solent where I live so it was really easy for me to walk to my marshalling point.

I had such a good morning. Where I was stood was mile 2, but as this was a two lap course it then became mile 6-7 meaning I got to cheer on my parkrun family and all the other runners not once but twice. In fact I got to cheer some on three times as where I was the runners then ran on, looped back and passed again behind us before starting their second loop and I was able to nip there before the front runners came back on their second loop.

Storm Angus blew through Gosport on Saturday night with really heavy rain and winds of 45mph so there was talk of the race being cancelled. However the weather fairy must have been smiling down as the rain stopped in plenty of time and the winds died down as each hour passed by.

The finishers bags are also pretty good. They included a Twix, Go Crispy slices, Capri Sun, bag of crisps, a banana, homemade cake, a voucher for 15% off at Absolute Running in Gosport and a material bag with the Gosport Half Marathon logo on.

There was also a Gosport Half Fun Run which was 1.2km.

Have you ever thought of running the Gosport Half Marathon? Here’s what some of the runners told me about the race.

Victoria W finished in 2:17:59
Had an amazing run at Gosport Half today. No PB however it was tough with that wind. With my mini supporters on route ready with free high fives and all the other supporters and marshals it made the run more enjoyable and just about doable. The views amazing once again, very lucky to have an amazing fantastic race on our door step very well organised. Cant say no to it 4th Gosport Half completed and sure I’ll be back again in 2017.

Jade L finished in 2:06:03
Gosport Half has the most amazing atmosphere. The support from the volunteers and the local community was incredible and helped me break my target goal

Louise T finished in 2:09:58
I loved the race today – despite the wind I had a fantastic time. Route was lovely and support was incredible the whole way round.

Louise on the left

Lara B finished in 2:17:59
My second year at the Gosport Half Marathon and once again a brilliant event with fantastic marshals and support from the locals. Conditions were a little challenging this year but still didn’t stop us all enjoying a fab run! Thanks to everyone who turned up today and cheered us on

Victoria on the left Lara on the right

A well organised race that was just like a giant park run with lots of the usual park run marshals encouraging us around.
Amy W finished in 2:17:31
Gosport Half was very well organised by Gosport Road Runners and the local community. If it wasn’t for the road runners I probably would not of got my PB today.
There was no need for headphones as the samba band was brilliant and people playing music from their cars from Lee beach front
The goodie bag was pretty good and was so glad about the cake after battling the wind. Loved every minute of it.

Paul A finished in 1:42:32
Gosport Half Marathon is a “must do” local race for me, even from being a visitor to the area and not a local! Today the wind made it a challenge but fabulous encouragement from the numerous marshals, friends and family certainly helped. The 2 laps and seeing runners coming the other way allows lots of waves and hellos with running friends too. I even managed a high 5 with my son and LOTS parkrun mini marshal Pearson, before he chased me and photo-bombed me

Plentiful water stations and entertainment help quick times on a mostly fast flat course, lean into the wind 1 way then float and be pushed the other. Personally a sore knee and calf meant I slowed over the last 3 or 4 miles so I can’t complain with a 1hr 42m time (although I do!) 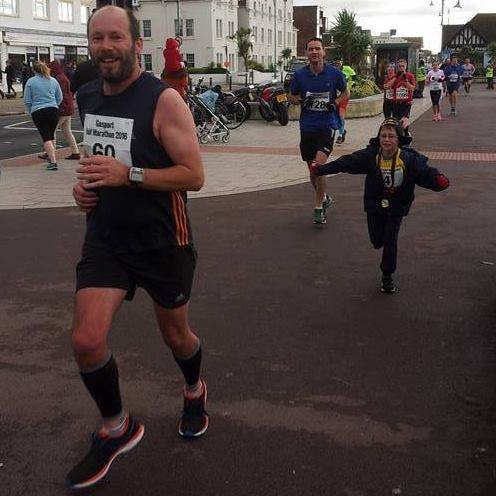 Louise B finished in 2:29:53
I had a brilliant run at the Gosport Half Marathon, mostly thanks to everybody, both marshals and spectators, who stood out in some challenging conditions to ensure that us runners were properly motivated to get our arses around the course! As a result I took 20 minutes off my previous HM time and am still smiling the day after 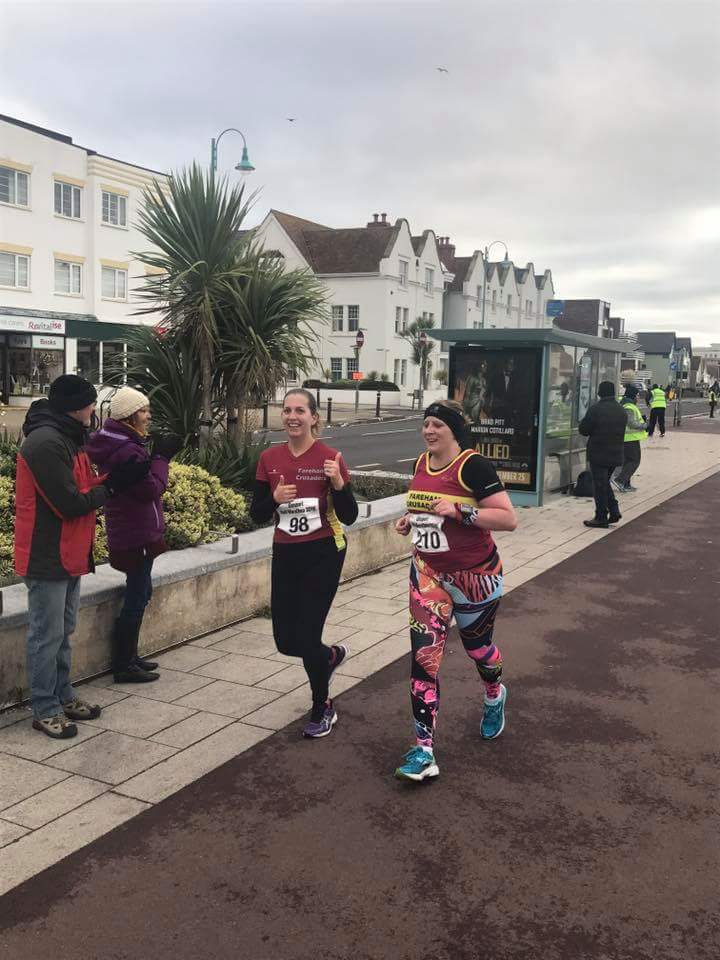 So there you have it, if you’re looking for a half marathon somewhere in the South you really can’t go wrong with the Gosport Half.

There’s a race review coming up from one of the runners too. Look out for it!